The GT Winter Series entered its second round of the season on 14-15 January 2023 in Estoril. The legendary ex-Formula 1 circuit near Lisbon had a lot of action in store and provided one or two surprises. With 44 entries, the field was not only large, but also high-class, featuring GT3, GT4, and three Cup Classes.

The Atlantic Ocean off the coast of Estoril was literally pounding the night before the 2023 GTWS opener, with waves up to 7m high and plenty of rain along the coast. So the morning qualifying session was to take place wet, but looking increasingly friendly as the clouds visibly cleared. So the secret of the fast times seemed to lie in the right timing, as the Portuguese sun slowly ate up the drops.

As Q1 began, a wet session was declared. Not why we went to Portugal! Unfortunately James was unable to set a time during qualifying owing to a failed component out of our control, and placed him P36 for the first race. Tom had better fortune, quickly demonstrating his pace, qualifying P1 in class and P12 overall.

Although the track gradually dried over course of the morning, it was still decidedly wet and all the drivers had decided to start on slicks. However, as the track still showed changing conditions, the experienced race director Werner Aichinger decided to increase the number of introductory laps to two so that the drivers could familiarise themselves with the conditions. This sightseeing didn’t seem to work for everyone, as the safety car was deployed almost immediately. The race was barely reopened after two laps of clean-up when another car left the tarmac and caused the next safety car phase. With the safety car back in, only a few laps remained however in the Cup 1 class, which was exclusively occupied by Ferrari 488 Challenge Evos, Tom came in P1 in class and P9 overall ahead of James who put in an impressive recovery drive to P2 in class and climbed 13 places to finish P23 overall. A solid start for the pair.

Sprint Race 2 with real performers and an absurd interlude

Race 2 and while a dry line had appeared on track, it was still wet off line. As the cars headed to the grid, there was a divide of those who had opted for slicks or wets. We went slicks.

The wet circuit off line claimed victims early on, resulting in another two safety cars but this time only for a one lap each, so it gave our drivers plenty of time to reset and push forward to climb the field.

Tom relished the dry line and made his way to third place overall with surgical precision. Unfortunately, he lost out on the fruits of his labour, albeit by the skin of his teeth, as he overtook just before the safety car line on the restart and was handed a 25-second penalty. It was only a matter of a few centimetres, but the rule is the rule. However, he had built up such a superior lead that he was still able to celebrate the class victory. 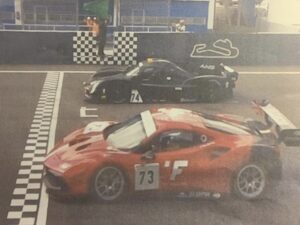 Again having not set a lap in qualifying, James started P33 for race two, but put in yet another remarkable recovery drive, climbing up to P17 overall, taking another 2nd place in class, in just 25 minutes. Quite impressive given his qualifying woes.

1 Hour Endurance Race, with many battles

The starting grid for the 60-minute Endurance is determined by the combined results of Q1 and Q2, Tom starting P10 overall and James back down to P34. A now fully dry circuit meant we send the drivers off to see what they could do, and they didn’t disappoint.

Over the hour, James made steady working picking off cars ahead climbing a total of 20 places overall. Mighty impressive on his first ever race in a 488 Challenge Evo. During the race, James maintained P3 in class, only to be slowly caught by a pro-driver who had taken over from the car’s owner during the mandatory pit stop. A thoroughly exciting 5 laps ensued as James did his best to fend him off as long as he could. Finally, the pro slipped through dropping James back to P4 in class but in true racer form, James kept pushing for the last two laps and his efforts paid off. The car previously running P2 in class had backed off and slowed. James was able to catch and pass, on the last corner, of the last lap recovering P3 in class! Thoroughly exiting to watch!

Once again Tom showed his class. Efficient in his driving style, fast as an arrow in his lap time, he grabs P1 in class for the third time of the day and an outstanding P3 in the overall, beating plenty of quicker machinery. Remarkably, this too is Tom’s first race in a 488 Challenge.

The entire team at FF Corse are delighted with the results and look forward to the next outing, Valencia, 18-19 February.

Thanks to The GT Winter Series.