FF Corse secured a stunning podium finish at the Silverstone British GT season final. In a 40+ car line up, Laurent de Meeus and Jamie Stanley were the first Ferrari over the finish line claiming P2 in the GTC Class.

The weekend didn’t kick off to a great start after a gearbox issue during the Friday Test. This resulted in a long night for the FF Corse mechanics and a gearbox change.

The Belgium driver started the Silverstone 500 annual race in P3, unfortunately the FF Corse car #15 got hit from behind by a Mercedes GT3 spinning Laurent off track early on. After some vital seconds were lost Laurent spent the next 30 minutes of his first driving stint climbing his way back up the ranks to P3.

Next behind the wheel was pro driver, Jamie Stanley who had a faultless first stint, maintaining position. With some clean racing and fast pit stops the driving duo maintained their position and seized the opportunity to claim second place towards the end of the 3 hour race.

Stanley and De Meeus finished the race P2 in the GTC class; a great achievement for both drivers, making their debut pairing in British GT.

Jamie Stanley, said: “What a fantastic weekend. The competition was incredibly tough this weekend, but Laurent put in an excellent drive and the team at FF Corse did an incredible job on the car. It was great fun to get back behind the driving wheel in a British GT race and to be part of Laurent’s debut appearance. Silverstone 500, in my opinion is the best race of the British GT Calendar so it was a great way to end the season.  A massive thank you to the team who put in a big shift to get the back on track after an unsure start to the weekend.”

Laurent de Meeus, HR Owen, said: “We were meant to be racing in Misano for the Ferrari Challenge Finali, which was unfortunately cancelled, so it was great to be part of a new Championship. I thoroughly enjoyed the race and it was brilliant to finish on the podium and as the leading Ferrari.”

Anthony Cheshire, Team Principle, said: “It was great to be back in British GT and fantastic to get a podium finish on our return. It was especially good to do it at the blue ribbon Silverstone 500 event and our home track. We hope to return next year with Ferrari in either the GTC or GT3 class.” 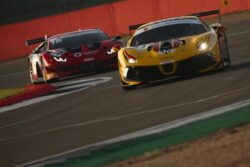 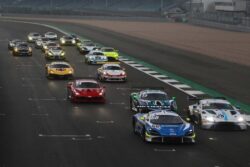 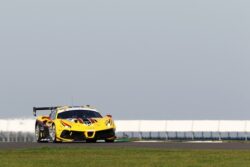