FF Corse entered a total of six cars for the second round of the Dunlop Britcar Endurance & Sprint Championships, held at Snetterton over the weekend.

The cars were entered for the Endurance and Sprint races and achieved considerable success, winning a total 6 overall and class wins throughout both Championships. 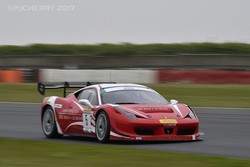 The first wins came in the first 50 minute race, with Bon Grimes & Johnny Mowlem leading the FF Corse Sextet home to win Class 2 of the Endurance Championship, in their Ferrari 458 Challenge GTC. The similar car of Marc Brough and Andrew Bentley won the same class in the Sprint Championship and the David Mason & Calum Lockie entry also won Class 1 in the Sprint division, after snatching the lead at the start of the race. Of other notable points was the Mike Wilds & Dino Zamparelli driver pairing, who put up a strong fight in race one in their Ferrari to take the fight to Bon & Johnny. 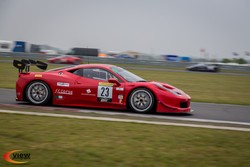 In the 2hr Endurance race held the same day, Bon Grimes & Johnny Mowlem again upheld FF Corse honours to take the Class 2 win and move to second place in the overall Championship (2 points behind the leader). The Graham Lucking/Leyton Clarke entry was a fighting second in class and challenged strongly throughout the race.

The next round of the Dunlop Endurance Championship takes place at Silverstone on June 24th.